The team at Minoli are celebrating, and reflecting, on an outstanding run of success at the annual Tile Association Awards after yet another accolade for one of the UK’s original tile distributors.

This is the fourth consecutive year that Minoli have been recipients of the Award for Excellence In Distribution, an unprecedented recognition of the company’s continued commitment in one of the Association’s most hard fought categories. 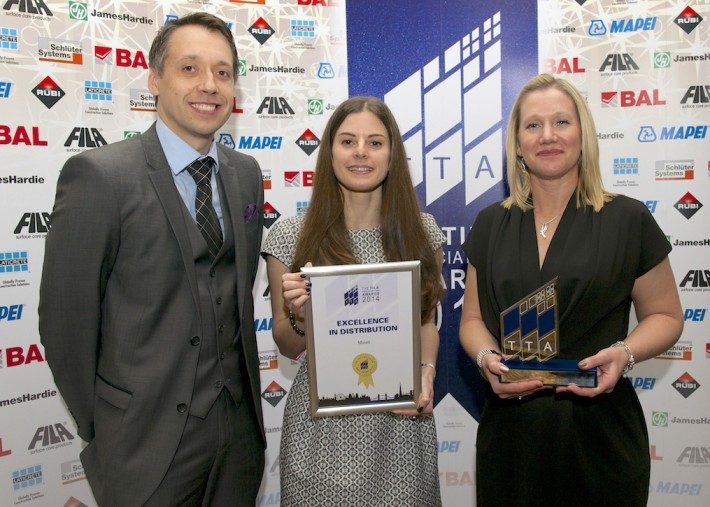 This year’s success is all the more poignant, for Managing Director Jonathon Minoli and the team, as 2014 marks the 20th anniversary of the passing of Jonathon’s father, Peter Minoli, who had the foresight to shift the company’s traditional focus from manufacturing Terrazzo to importing ceramic tiles in the 1960s.

In a year that has seen other independents become engulfed or recoil against difficult trading conditions, Minoli has once again invested and expanded with additions to the fleet, growth in wholesale, more employees and a brand new showroom in London’s West End.

Called ‘The Surface Within’ and located on George Street W1, this new resource centre showcases the very best of Minoli’s exciting new and established collections with extensive displays and samples, product information, brochures and technical support.

Managing Director Jonathon Minoli said, “We’re delighted to have once again been commended for our efforts by our industry peers in the most important of categories for our business.

“Achieving ‘Excellence in Distribution’ is exactly what we strive for every working day, and wholly reflects my father’s core values of offering excellent products at competitive prices, but most importantly, supported by a service that is still considered second to none.”

The Tile Association Awards celebrate all that is best in the wall and floor tile industry. They recognise and reward the outstanding products, people, businesses and projects of the preceding year. The winners were announced at the annual TTA Awards Ceremony, attended by some 500 industry representatives at the London Hilton Metropole on 25th April.

Posted in Minoli, Minoli London, THE SURFACE WITHIN, TTA Awards